History of the Paso Fino

The first cattle and horses imported from Spain to Puerto Rico arrived on the Island in 1509, brought in by the famed explorer, Juan Ponce de León. The horses were descendents of the Berber breed from the province of Andalucia. In 1510 Juan Ponce de León introduced mares from Seville and Cristóbal Sotomayor also imported additional equine stock including additional mares. As a point of historic significance, these horses were imported to the Island in 1511 at the same time the indigenous Indians were rebelling.

As soon as 1515 Puerto Rico was already breeding and exporting horses to other parts of the New World. Fernando Pizarro purchased 20 colts from Puerto Rican breeders for his brother Francisco Pizarro to be used in the Spanish conquest of Peru. The history of the famous Peruvian saddle horse can be traced back to these colts from Puerto Rico.

Later in 1519 Hermán Cortés, who bred Andalucian horses in the Puerto Rican municipalities of Toa Baja and Dorado sent much of his stock to support the Spanish “Conquistadores” in their conquest of Mexico. Thus the equine descendents of the Spanish Andalucian breed of horses, by way of Puerto Rico, provided critical means of support and transportation for Spain and it’s conquests in the New World.

As time went by the importation of colts continued to the Island consisting mainly of pure-bred horses from Andalucia and Berber mares for breeding.  During this time the most well known horse breeders were based in the towns of Jayuya and Guayama. To a ranch in Fajardo arrived “Ribí”, of Andalucian stock, a strong specimen providing stud services to the horsemen of Canóvanas and Río Grande.

Development of the Breed

From the aforementioned families and strains of horses were born 12 or more precursors of today’s Paso Fino. Island breeders, using natural selection, created a horse with an easy walk, a rhythmic cadence, flexibility, smoothness of movement and providing ultimate comfort for the rider. The Paso Fino horse is not only bred for the ranch owner, the foreman and laborer also ride these fine animals. The Paso Fino is not just a show horse, they are great saddle horses with a great rhythmic walk.

At the beginning of the 20th century, the growth of the number of Paso Finos on the Island was considerable. However, in the 1920’s the population was constricting as  other countries such as Cuba began  purchasing the top breeding mares.  In the thirties and forties there were only four horse ranches dedicated to conserving the excellence of the Paso Fino, protecting the race from disappearing in Puerto Rico. The Calaf brothers of Manatí, Don José Pérez Llera, Don Genero Cautiño Insúa and Don Manual González were all responsible for saving the Paso Fino breed on the Island.

Under the guidance of Don Genero Cautiño Insúa and others, the Puerto Rican Paso Fino saddle horse breed continued to evolve and improve. In 1932 “Dulce Sueño” was born, thus creating an equine lineage of superior Pasp Fino. According to Carlos Gaztambide Arrillaga, (Secretary to the Board of Directors of the “Hípica” Commission) “Dulce Sueño was the genetic dynamo, when cross-bred with his nephews, produced the best Paso Fino horses in Puerto Rico,” and continuing, “Carmelo, father of “Dulce Sueño’, also fathered ‘Regalo, Príncipe, Toledo, Pocholo and Patiblanco, thus imposing the desired characteristics for future generations.” 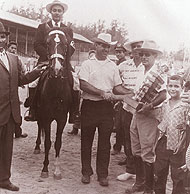 If one considers the mix of characteristics created by continuous cross-breeding, plus the addition of modifications introduced to the breed, in the quest of producing the desired results, it is understandable the difficulty of establishing a rational classification, between the different equine breeds and their anatomical characteristics.

What defines an equine breed, is the quality of the geneology in a given country. The history of the Paso Fino breed can be shown at times with different varieties and each breed can have unique, special qualities for various judging criteria.

In Puerto Rico, being an Island, presents an environment for crossbreeding. This mating situation distinguishes itself by the closeness of family relationships with the mother and father. Due to the process of selection, at first unwittingly and later by design, emerged a type of horse that adjusted to the needs of the rider, giving preference to a horse comfortable to ride long, mountainous distances. This horse developed a gait to protect its’ fore legs with a unique, lateral, four-time stride. The Paso Fino horse moves forward with rapid movements, lifting its’ hooves inches from the ground with a wristing motion without any lateral deviation.  Forward motion is slow going, yet the legs move very quickly, creating a short stepped walk, with a unique, rhythmic cadence distinctive of the breed. This gait is the result of decades of careful, genetic selection.